Sometimes when I do a private consult, I realize that I do a lot of different things when training show dogs or showing show dogs. Today, during a private, I realized something that I do, without thinking about it, that might help people for free stacking. The client wanted help on how to keep her dog from moving around when free stacked in front of her. She showed me first and he was following food, moving around, etc. Then, I took her dog for her to watch so I could work him and we could talk about what I do. When I took him, he stacked in front of me and held it staying in position. We were able to determine what we were doing differently and how we could improve it for her.

Here are the changes that I made for her. When she moves him around and then gets into the lineup, she is
to stand in front of him (which is where she wants to be for his free stacking). She will also change the way she is holding the lead. When she moves him the lead is gathered up to pick up slack, as it should be. But, when she is free stacking him and standing in front of she is now holding the end of the leash at the handle with the slack loose. This will cue her dog about what they are doing and what he should do. When she changes the way she is holding the lead, it means that they aren't moving and he will be free stacking in front of her. More information and clear communication for him will help him succeed.

Next, she will hold the bait in two hands with her arms bent up so her hands are at her waist or so. Prior to this, she was, without realizing it, keeping the bait low so that he was just following her hand with the bait in it. This would be fine if her goal was to lure him into a position, but at this point, that isn't what we wanted to do. Bending both arms told him it wasn't a sit cue and it kept him looking up and interested in the bait.

She may ask him to step forward or back up if necessary, but once he is where she wants him, her feet will be together and remain that way.

Finally, he needs to have a lot of feedback that he is doing it right. He has a default sit and if he doesn't know what he should do, he will throw his head back playfully and sit, however, if he is given feedback and information, he knows what to do and is happy to do it.

Wither her permission, I am sharing a picture from today. We weren't actually being too picky about his stack as much as we were that he remain standing and hold still. 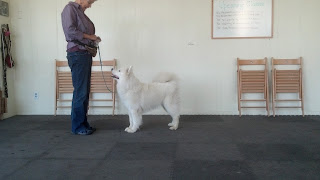 Posted by Vicki Ronchette at 3:58 PM